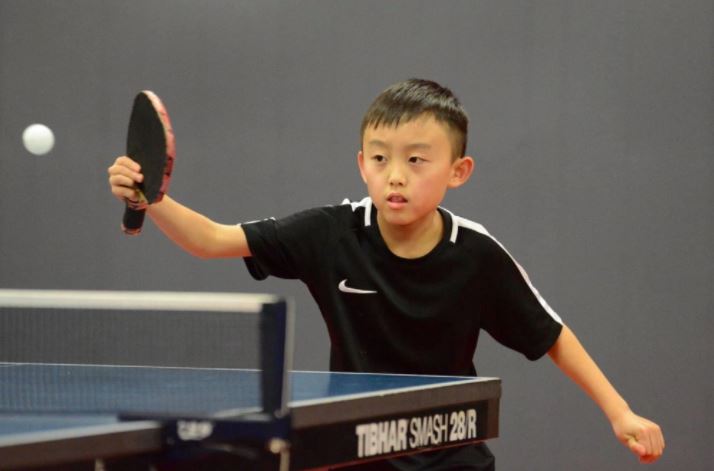 Junior of the Year – Max Henderson (Bay of Plenty)

Most Improved Boy of the Year: Eli Ho (Waikato)

Most Improved Girl of the Year: Ayumi Moriama-Picard (Auckland)

Alan & Edna McCallum Cups (junior umpire) – not awarded due to cancellation of the 2021 NZ open championships.

The Waikato nine-year-old (pictured) is a table tennis player on the rise, which has been further emphasised after he was named Table Tennis New Zealand’s most improved junior boy for 2021.

Eli’s win was one of six gongs handed out as part of TTNZ’s annual awards, which were again impacted because of Covid-19 enforced event cancellations, including the national championships for the second straight year.

Six awards could not be handed out because of the pandemic, but few could argue about Ho’s most improved junior boy title.

Eli had a quite remarkable year, improving his tournament player rating points numbers by 361, while winning 84 of his 107 matches. Of particular note, was his fine showing at the North Island individual championships in Wellington where he won the under 13 boys’ singles, the open D grade singles and was runner-up in C grade, beating well performed senior players along the way.

The fine season from Auckland’s under-11 player Ayumi Moriyama-Picard was also noted by the awards’ panel, who named her the most improved junior girl of the year.

Ayumi won 43 out of 61 tournament matches in 2021 to record a significant rating points’ jump.

Previously, the most improved junior title had gone to just one player from either sex, but the 2021 awards’ committee opted to recognise separate girl and boy winners in a move that was hoped to continue.

The all-round class of Max Henderson was also celebrated and recognised when the Bay of Plenty teenager was named the junior of the year.

Henderson, 18, had a tremendous year on the table, consolidating his standing as one of our very best juniors. Away from playing, he was equally outstanding. Among other things, he helped coach para-athletic players in weekly sessions in Tauranga and assisted with coaching in a Bay of Plenty schools’ programme .

Matthew Ball, from Palmerston North, edged a quality list of nominees to be named coach of the year. Ball has coached in Manawatu for the past 10 years and touches all levels of players, as well as administering and implementing coaching programmes through the region.

Southland’s seemingly ageless table tennis servant Ron Garrett had another fine year rewarded when he was named TTNZ’s official of the year.

In 2021, Garrett refereed at the New Zealand veteran championships, helped organise the North versus South inter-island vets’ match, officiated at the Southland open and was a member of the national referee and umpires’ committee.

Garrett remains one of TTNZ’s most loyal and outstanding performers, as does Waikato’s Kerry Allen, who was named volunteer of the year.

Allen is the hard-working Waikato Table Tennis Association secretary, whose input continues to go well beyond those normal duties to ensure her association keeps ticking along nicely.